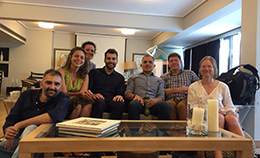 The consortium got together for its planned face-to-face meeting in Athens from the 8th to 10th of May 2018.

During the meeting the project partners discussed about the progress made so far, the latest technical developments of the COMRADES platform and the upcoming release of the demo’s first version.

Our partners, Open University and Ushahidi presented and analysed the humanitarian ChatBot that will be integrated in the platform and generally its future extensions. Emphasis was put also on the networking efforts with humanitarian organizations.

The dissemination activities performed so far were presented by partners while a discussion was made about the planned actions that will be undertaken the upcoming months. During the dissemination session, the publications of the project were specifically discussed and it is really interesting to mention that the consortium has already written 29 papers within the 29 months of its implementation!

During the wrap-up and closing session of the May meeting, the partners explained the topics that they will be working on for the remaining 7 months of the COMRADES lifecycle. All partners decided to meet again in some months time for the next project meeting in the Netherlands...