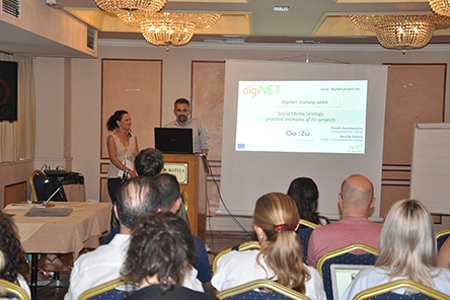 The DigiNet project funded under the Erasmus+ programme organized the DigiNet Training Week which took place in Athens, Greece from the 28th of August until 1st of September 2018.

The communication team of our project, Vassiliki Zalavra and Pantelis Kanellopoulos were invited by Electronic Compass as guest speakers to the training and they presented to the audience how to build and implement a successful social media strategy.

Within this context, Vassiliki and Pantelis primarily presented the COMRADES project and later on the strategy that they follow in order to promote the project and its results. In particular, they talked about creating effective messages and the social media networks that they deploy as well as the lesson learnt through their experience on the topic.

The audience of the training consisted of youth and potential entrepreneurs who wish to create their own e-enterprise and come from Spain, Malta, Greece, Bulgaria and UK.