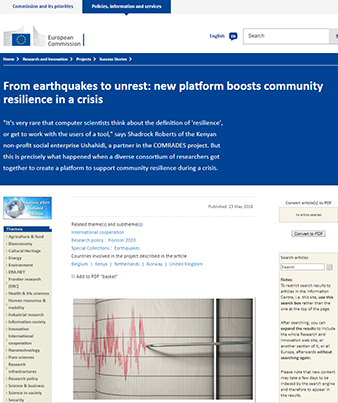 From earthquakes to unrest: new platform boosts community resilience in a crisis

"It's very rare that computer scientists think about the definition of 'resilience', or get to work with the users of a tool," says Shadrock Roberts of the Kenyan non-profit social enterprise Ushahidi, a partner in the COMRADES project. But this is precisely what happened when a diverse consortium of researchers got together to create a platform to support community resilience during a crisis.

The team behind the EU-funded COMRADES project has its sights set on empowering communities – through socio-technical solutions – to help them reconnect, respond to and recover from crisis situations. These could include an earthquake, criminal threat or unrest during elections.

Roberts describes the platform as an internet-based piece of software that sits in the cloud, but is not dependent on the internet. “It can be accessed via the web or via apps, and it can ingest different types of communication, such as text messages,” he explains. The tool should not be confused with social media channels; on the contrary, its ability to collect information from different sources and at grassroots level sets it apart.

During a crisis, local communities and remote individuals would be able to use the platform to share knowledge through crisis reports and connect to others based on emergency needs and offers.

The role of Kenyan partner Ushahidi is to develop the software. The organisation’s knowledge of crowdsourcing – of obtaining information from diverse individuals and organisations – has also proved very valuable.

The Kenyan elections in 2017 provided a perfect opportunity to deploy the software, and to learn from how it would be used in real life. Its role would be to record reports of electoral offences, violence or peaceful activities, and to provide information on voting in Kenya’s counties and constituencies.

The addition of a Facebook chatbot allowed users to submit reports via Facebook – and around 3 000 such reports were received, in addition to some 17 000 reports received via other means. For users, taking part provided not only a means to report suspicious or violent activity, but also the knowledge that their voices would be heard, and their reports taken seriously.

“We were impressed with its success, with how many people wanted to use it,” says Roberts. “We’ve gone well beyond the initial expectations of the grant.”

The COMRADES team learned a lot from the elections experience, and in particular about how volunteers, reporters, responders and community activities use Facebook bots – which was not necessarily in line with their assumptions.

Smaller scale tests have also taken place in Nepal in relation to recovery after the 2015 earthquake, and for reporting cases of sexual harassment in Cairo, Egypt.

“Several of the features being developed in COMRADES are becoming commercial software for mass adoption,” says Roberts. These features are bringing much needed artificial intelligence powers to the platform, to increase the software efficiency and to reduce the level of effort required by the platform users. Meanwhile the platform will be open source and therefore accessible to all. The platform has already been consulted 150 000 times, indicating a clear appetite for such a tool. Roberts is confident that the platform will definitely be used in a live crisis environment in the future.

As a non-profit organisation, Ushahidi has benefitted enormously from its involvement in an EU-funded project. “In Kenya we don’t have research and design funding. This funding opportunity allows us to improve. It allows us to work with experts in the field, such as in human-computer interaction. It also allows us to access knowledge and to interact with our users,” says Roberts.

The fact that COMRADES is an EU-funded project also pushed Ushahidi to work harder, for example in the privacy domain, as EU rules on data had to be followed. “The EU sets the bar high. We had to setup up and meet the goals in order to be a partner in the project,” says Roberts.

The project is set to end in December 2018. In the meantime, Roberts is full of praise for the other COMRADES partners, each of whom has brought something unique to the project. “It’s really a good environment. It’s what science should be,” he says.